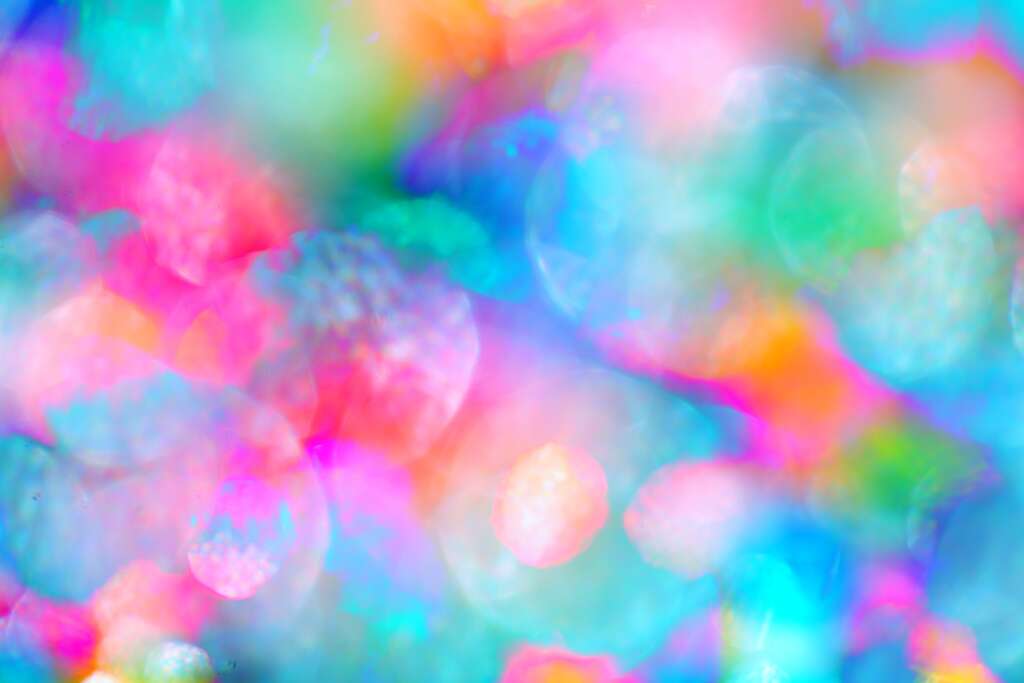 There are thousands of species of mushrooms, with more out there sure to be discovered. Out of these, there are over 100 types of edible, psychoactive mushrooms. These are found growing in various places all around the world.

The most popular types of magic mushrooms are easy to grow, found in abundance in some areas, and perfectly safe to eat. However, mushroom hunting can be dangerous, as there are many types of mushrooms that look incredibly similar to each other, and some of them are not edible, but poisonous! (Or as some say, only edible once…) Always be completely sure of what you have before eating it.

Read on to learn more about the most popular psilocybin mushrooms out there, and what makes them so enjoyable. 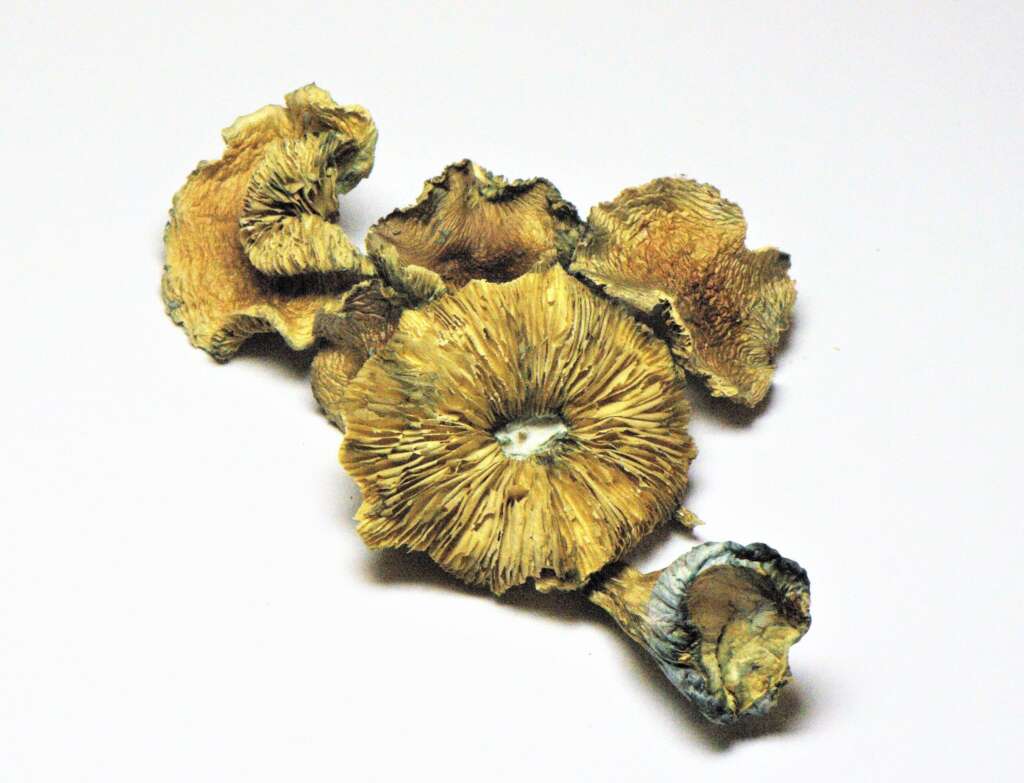 Golden Teachers are an ideal starter mushroom strain for the beginner’s first adventure. They offer a calm, relaxing trip with a slightly shorter duration than some other kinds of shrooms – often between 2 and 4 hours long. This is one of the easiest strains to grow as well, so it makes sense why they have become so well-known.

This strain of psilocybin mushrooms was named for their shiny gold caps, and the insightful experiences that many people have when taking them. Many people have sudden realizations brought on by a change in the way they are thinking about things.

With their trademark wide, shiny, gold caps and long, winding stems with blue bruising, golden teachers are a sight to behold! 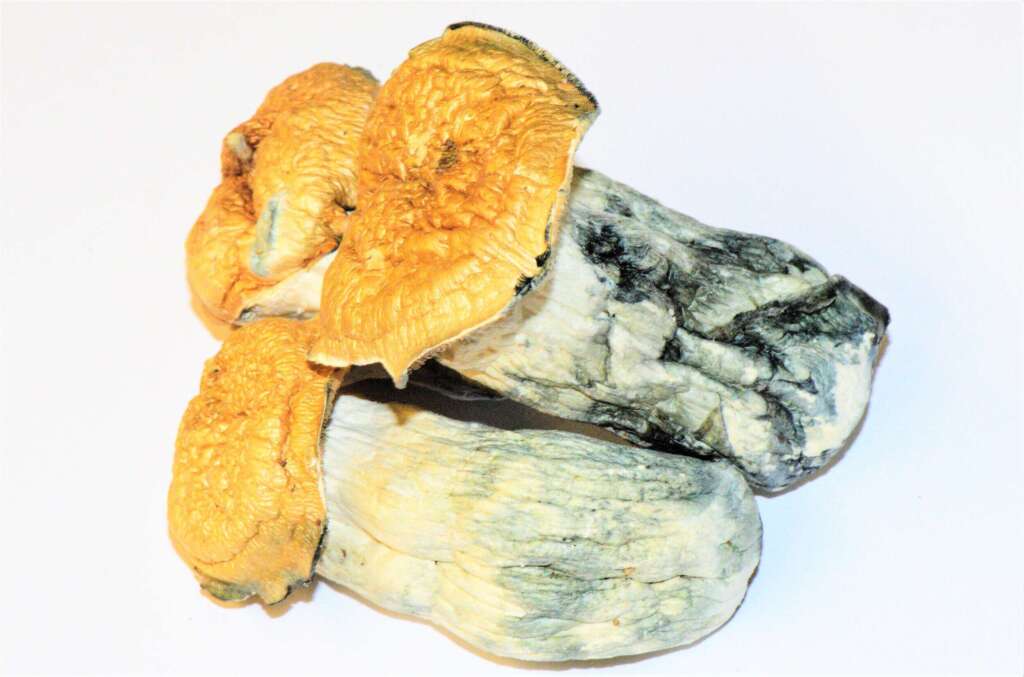 Penis Envy is known for being the strongest variety of Psilocybe Cubensis mushroom. It is considered more intense, visually stimulating, and euphoric than any other type of magic mushroom in the Cubensis species. The trip can also last much longer than with other strains.

This is also known for being a difficult strain to cultivate, making them more rare than some other popular psilocybin mushrooms.

Penis Envy mushrooms are named for their large and phallic shape when picked fresh. They have a dense, thick, white stem with blue bruising along it, ending in a small, rounded gold cap. 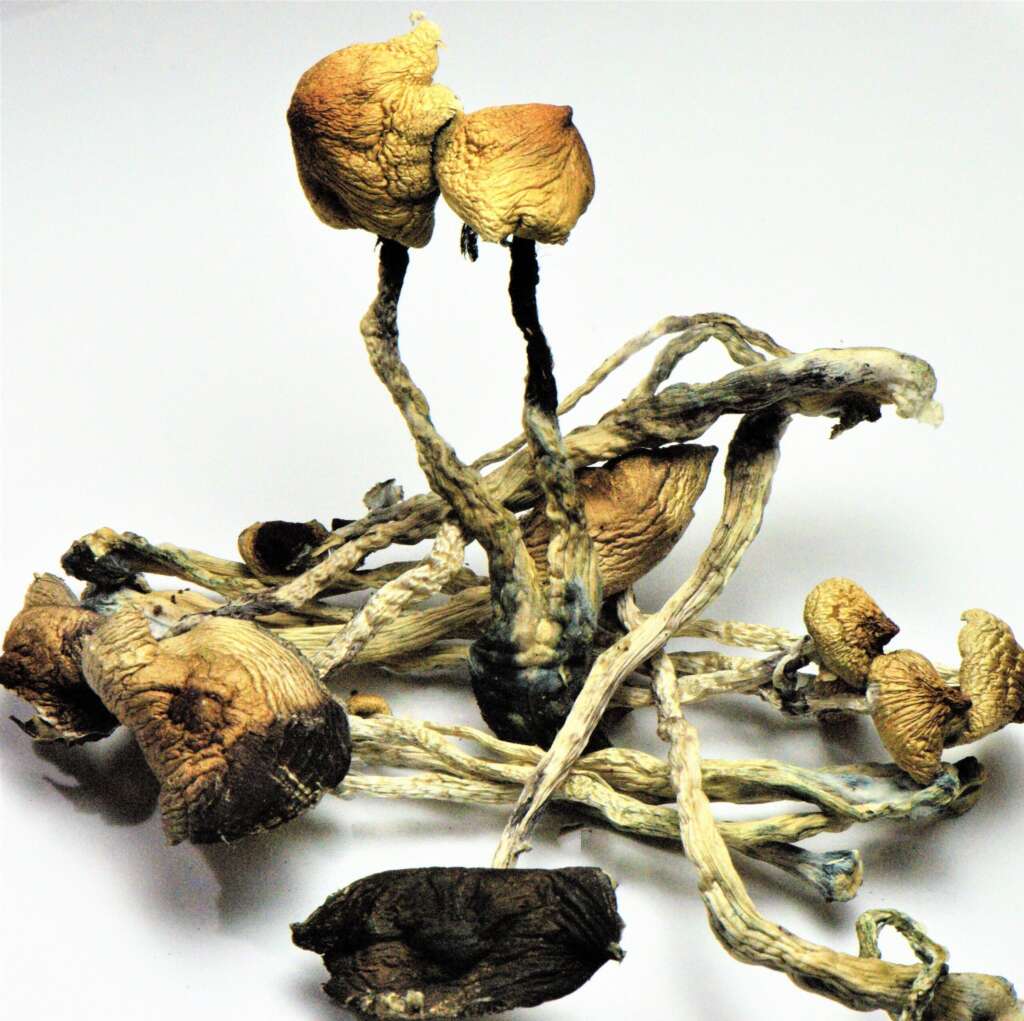 Blue Meanies are one of the more potent varieties of Psilocybe Cubensis mushrooms. Their trip usually lasts between four and five hours.

Be careful not to mix these up with the other mushrooms known as Blue Meanies – Psilocybe Cyanescens – which are at least twice as powerful as any Cubensis strain.

Blue Meanies are named for the bright blue bruising that appears on the stem of the mushrooms when touched. They are small, dense shrooms that can have a thick stem. 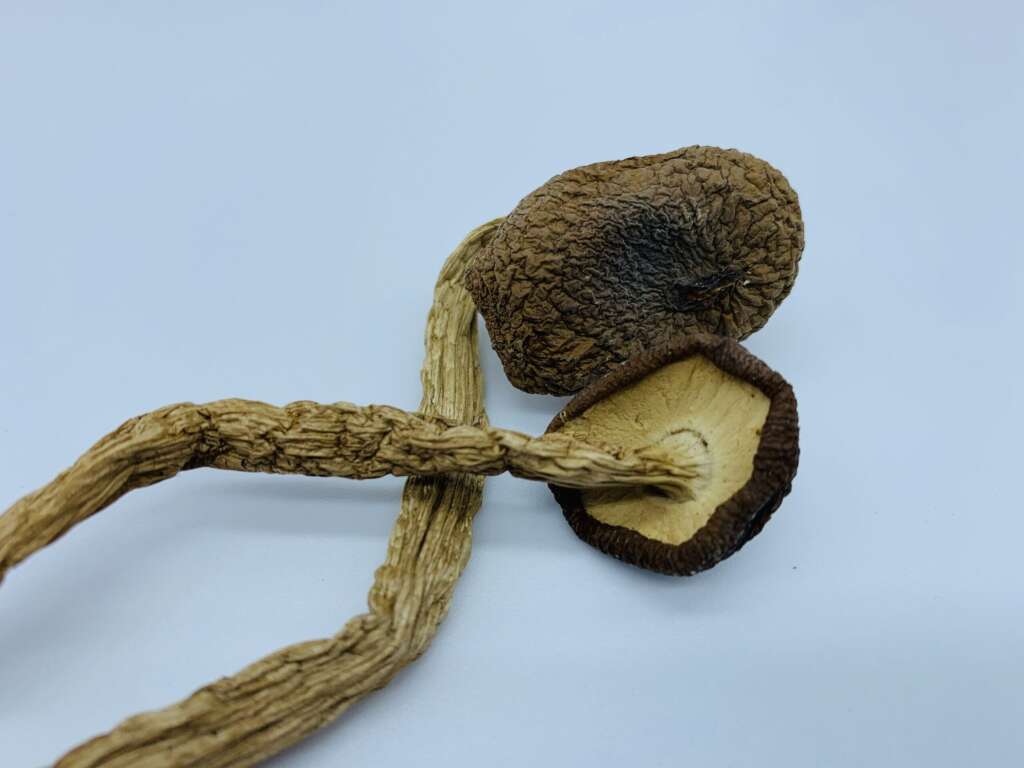 Psilocybe Mexicana mushrooms have been used for over 2000 years in indigenous cultural practices in North and Central America. They are named for their more recent discovery in the 1950s in Mexico, where they were taken from to be studied.

Mexicana mushrooms have a 6-8 hour long trip on average. They vary in weight and size, but generally have small, caramel coloured caps and slightly pointed caps with inward-curled edges. 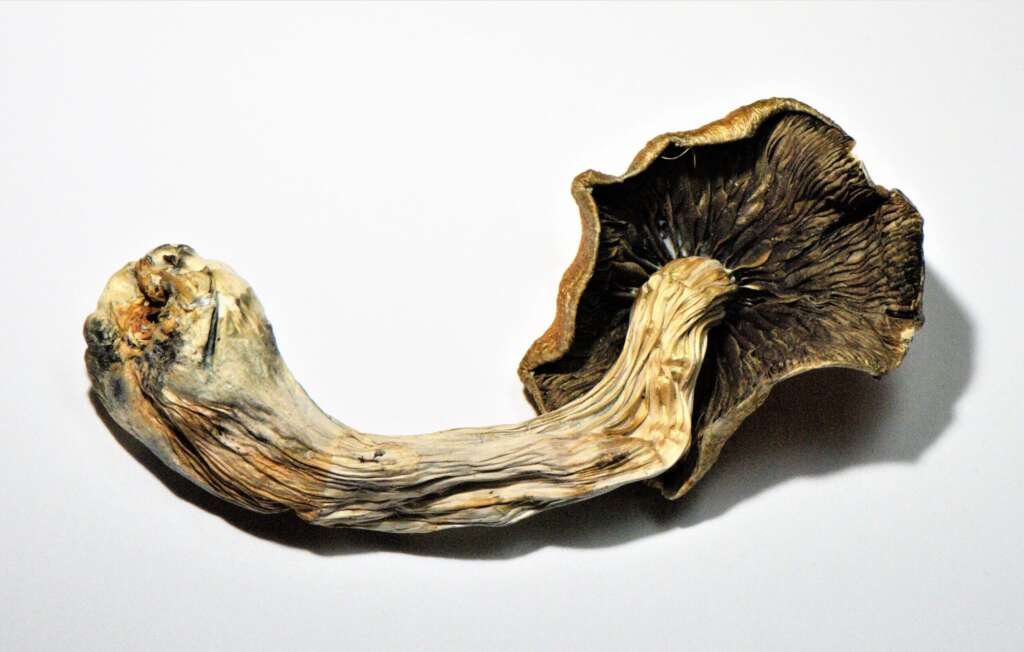 Amazonian mushrooms were first found in the Amazonian jungle. The effects are noticed most intensely during the trip, but have reportedly lasted for days on a subtle level. This makes these mushrooms a great choice for those who are microdosing for mental health benefits.

The Amazonian mushrooms are known for growing huge – between 6-12 inches before drying – with thick, dense, white stems. They also grow massive amounts of mushrooms very quickly, so they are a favourite of cultivators. 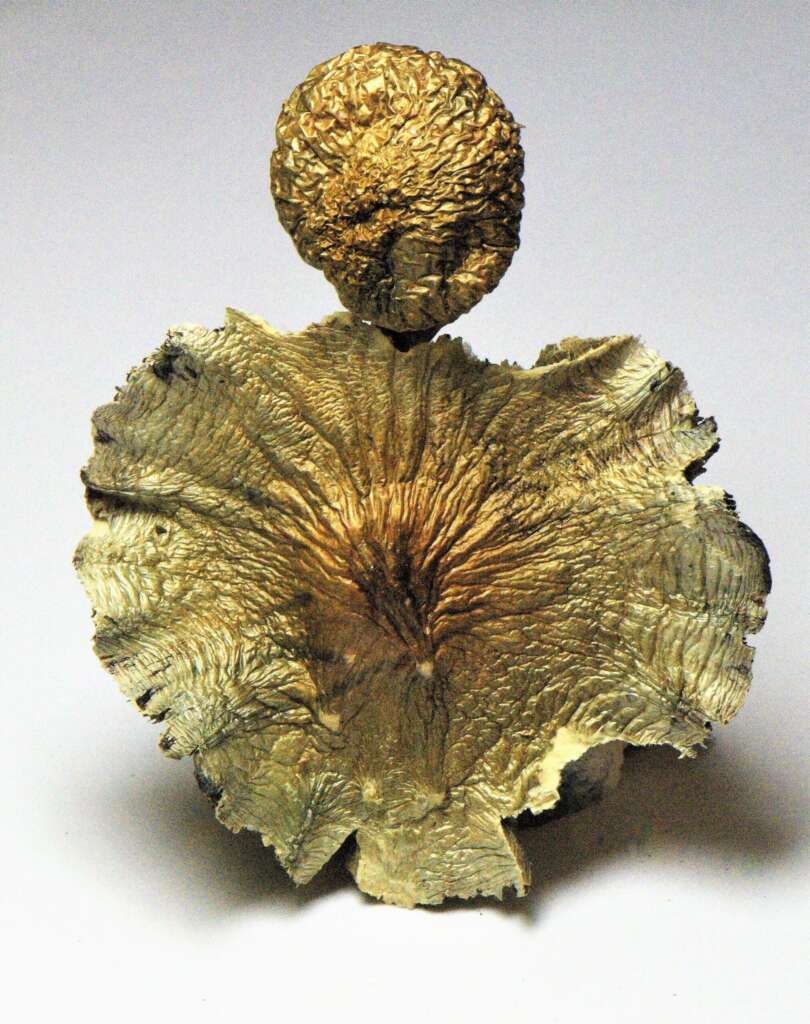 B+ is another strain of Psilocybe Cubensis mushroom that is considered good for those new to mushrooms, with a light and relaxing trip. They are known for their richness, warmth and well-balanced high.

The colour of B+ mushrooms varies from caramel to gold-coloured caps, with thick, long, white stems that bruise blue.

These mushrooms are popular with growers because they are easy to grow in many conditions, although their growing speed is average.

Shroom Wave has all of these kinds of psilocybin mushrooms and much more for delivery across Canada. Plus, read our other educational and entertaining magic mushroom blogs here.

One thought on “6 Most Popular Types of Psilocybin Mushrooms”